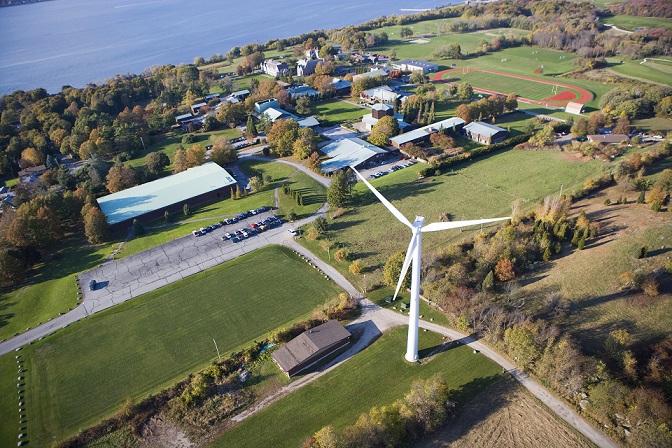 But the real cause for celebration is the 11,548,868 kilowatt hours of clean electric energy the turbine has generated for the School and Monastery over the past 10 years â enough to power approximately 1,150 homes for one year.

"It has been an unequivocal success," stated Brother Joseph, who first championed the idea of a wind turbine at the School and Monastery as the best option for a renewable energy source and an effective way to lower the institution's rising energy costs. The mid-sized turbine, with three 77-foot carbon fiber blades atop a 164-foot-tall tapered tubular steel tower, has performed flawlessly since 2006; it supplies 40 percent of the School's overall electrical energy use and has become a landmark in the local Portsmouth neighborhood.

The turbine went online at 10:00 a.m. on March 31, 2006, 15 months after the Abbey applied to the State of Rhode Island Renewable Energy Fund for its support of the wind turbine project and one year after the Town of Portsmouth and Portsmouth Abbey neighbors gave their permission for the turbine project to move forward. Since 2006, thousands have toured the turbine, including numerous school and environmental groups, and its iconic, graceful image has become a welcome addition to the 525-acre campus.

"Everyone says we should be fighting pollution and finding alternative forms of energy but then they are unwilling to risk it in their own neighborhood," said Brother Joseph at the time of the wind turbine's installation. "As stewards of a beautiful property and as educators of students, we felt we should take a pioneering role and lead by example." Today, a decade later, he added: "It has turned out to be everything we hoped for. We have sent out hundreds of graduates around the country and around the world who have experienced the lived-with reality of the turbine and enjoyed its benefits to their school. It has truly been a positive, successful project for the Abbey and School."

The award-winning turbine was the first of the School's and Monastery's many initiatives in support of conservation and renewable energy. In addition to the wind turbine, the Abbey campus is home to: a faculty solar home; two eco-friendly BluHomes for faculty housing; two energy-efficient residential houses, St. Brigid's and St. Martin's, for students and faculty that employ a number of conservation features; two electric maintenance vehicles; a "tray-less" dining hall; and a composting program.