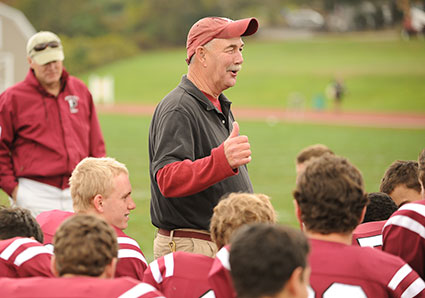 Portsmouth Abbey School has been playing Varsity Football since 1931. We have varsity and junior varsity teams, with separate coaches and schedules.

Portsmouth Abbey School Football competes in the prestigious Evergreen Football Conference. Since joining the conference in 2003 the Portsmouth Abbey football team has been recognized as one of the top Prep School football programs in New England. The Abbey competes in the Southern Division, which is composed of Tilton School (NH), Kents Hill School (ME), Hebron Academy (ME), and Dexter School (MA). We also compete against the North Division's Proctor Academy (NH) and Holderness (NH).

The football program at Portsmouth Abbey School encourages students to reach their potential in the classroom and on the football field. Players are challenged to be fundamentally sound, to know their assignments, to play with great enthusiasm, and to develop their strength and fitness. A 3000 square foot state-of-the-art fitness center opened in the spring of 2004. This facility provides the football program, and all Portsmouth Abbey School student-athletes, with a top-flight facility to improve strength and fitness.

Elliott grew up in Wallingford, CT and decided to teach at an independent school because of his high school experiences at Avon Old Farms. He also finds joy in working with motivated young adults both in the classroom and on the field. Elliott joined the Portsmouth Abbey faculty after graduating from Williams College in 2007, where he received a B.A. in economics. While at Williams, he started on the football team for four years at defensive back and he captained an undefeated NESCAC championship team during his senior year. At Portsmouth Abbey, Elliott has taught various levels of Algebra II, Precalculus, and Calculus. He currently teaches AP Calculus AB.

Coach Al Brown came to Portsmouth Abbey in 2000, bringing with him a wealth of experience in coaching. He has a combined 39 years of coaching experience at the collegiate and high school levels. At the collegiate level, Coach Brown was named the NCAA Division III Coach of the Year and since joining the Portsmouth Abbey community has earned multiple recognitions as Coach of the Year by both US Lacrosse and the EIL. He has been the head coach of nine high school lacrosse league championship teams and four collegiate league championship teams. Coach Brown was also the assistant coach of the ECAC Upstate Football Championship team while at Alfred University. As a student-athlete, he was a two-time collegiate All American in lacrosse, and he captained the team in his senior season. He played football and lacrosse in both high school and college. In addition to being the offensive coordinator for varsity football and head coach for varsity boys’ lacrosse here at Portsmouth Abbey, Coach Brown is the School’s athletic director. He lives in a house on campus with his wife, Linda, and enjoys visits from his three grown children - Jennifer, Meagan, and son Taylor.